Required cookies are essential to let you move around the website and use its features, such as accessing secure areas, shopping baskets and online billing. These cookies allow our website to provide services at your request.

Functionality cookies are used to remember the choices you make, e.g. your user name, log in details and language preferences. They also remember any customisations you make to the website to give you enhanced, more personal features.

Targeting cookies collect information about your browsing habits to deliver adverts which are more relevant to you and your interests. They also measure the effectiveness of advertising campaigns.

The best road tunnels in the UK for motorists to enjoy the sound of their cars have been revealed in the new Alfa Romeo ‘Sound Tunnel Index’.

The 658-metre long Penmaenbach tunnel in North Wales topped the Alfa Romeo rankings, after being judged to provide the best acoustic environment to fully appreciate a car’s engine and exhaust sounds.

The Alfa Romeo ‘Sound Tunnel Index’ ranks the top 10 tunnels for motorists across the UK, with each location rated based on a sound recording of the Stelvio Quadrifoglio performance SUV driving through each tunnel. The sound, captured from inside the vehicle, was then assessed by Sandy Brown - one of the UK’s leading acoustic consultancies.

Its experts – who led acoustic improvements to the iconic Royal Albert Hall – measured the engine and exhaust sound, plus tyre, road and wind noise, to help rank the findings. Following the objective analysis, Sandy Brown experts then provided a subjective score for each tunnel, with both scores combined to help create the definitive ‘Sound Tunnel Index’.

With a one-way traffic to each of the tunnel’s twin bores, an excellent road surface, and a distinctive U-shaped profile, the Penmaenbach tunnel in North Wales provided the best acoustic environment to enjoy a car’s engine sounds.

The Saltash tunnel in Cornwall and Beaminster tunnel in Dorset finished second and third in the ranking respectively.

Alfa Romeo began by asking its Alfisti fanbase to nominate the UK tunnels that provide the best acoustics. The top 10 were shared with Sandy Brown, whose experts visited each tunnel.

The Stelvio Quadrifoglio, which is powered by a 510hp 2.9-litre V6 Bi-Turbo engine, was driven through each tunnel in Dynamic mode, giving the performance SUV a sharper throttle response and enhanced exhaust sound, while a sound metre recorded each drive from the passenger seat.

Richard King, Associate at Sandy Brown, said: “The shape and size of tunnels, their length, the speed of the road, background sounds such as other cars, airflow and tyre noise, all have an impact on the sound you hear while driving through it. This is heightened in a performance SUV like the Stelvio Quadrifoglio, where the combination of the V6 Bi-Turbo engine and exhaust sound add to the excitement, so this index will help petrolheads and car lovers across the UK make the most of their drives.”

The passenger window was down during all measurements to ensure the full effect of the engine and exhaust was captured for analysis. 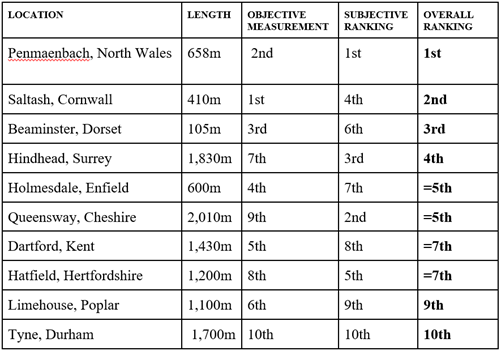 With a distinctive U-shaped profile, a good road surface and one way traffic configuration in each tunnel, Penmaencbach scored the highest when the vehicle noise analysis was combined with the subjective review by the Sandy Brown team.

High road speeds are not essential to enjoy a tunnel - as proven by Saltash, which is subject to a 30mph speed limit. Without the high levels of wind and tyre noise that can drown out the engine, the V6 Bi-Turbo was clearly audible with only a gentle throttle.

At Beaminster, the narrow U-shaped design of the tunnel means that drivers can hear the engine sound really clearly, despite the traffic.

This cylindrical bore tunnel has a good road surface and, at 1,830m long, is the second-longest tunnel on the list.

The Holmesdale tunnel is a slight outlier in the top five as it is a rectangular tunnel with four lanes of fast moving traffic. With a good road surface, the traffic is split into separate traffic sections improving sound quality.

Despite being a lengthy tunnel with a good road surface, the profiling to the tunnel walls resulted in a ticking effect, which impacted the results. The narrow lanes and bumpy road markers also created more noise, distracting from the noise of the car.

The upward slope in the Dartford tunnel produced a good sound as the engine needs to be engaged to maintain speed, and a one-way traffic system ensures there’s little disturbance from oncoming cars. However, the tunnel itself is prone to high wind noise and the tar joints on the road surface are very audible when crossing.

Another tunnel with a good one-way traffic system that helps its score. However, the current road surface produces a really loud noise, cancelling out any engine or exhaust growls. Hatfield tunnel does appear to be undergoing road resurfacing works, so might rank higher once completed.

With a long ascent that requires the engine to work slightly harder, and a one-way traffic system, Limehouse tunnel ranked lower down the list due in part to the volume of traffic driving through it, which is typically high at all times – even late at night. With a side tunnel merging, this can cause more congestion with drivers switching lanes.

A one-way system was the biggest highlight of the The Tyne tunnel, which was ranked down for the high levels of vehicle traffic, while its rectangular profile didn’t make the best of the Alfa Romeo Stelvio’s engine and exhaust sounds.

The award-winning Alfa Romeo Stelvio Quadrifoglio has a 2.9-litre V6 Bi-Turbo petrol engine, which generates 510hp and launches the car from a standing start to 62mph in 3.8 seconds and onto a top speed of 176mph. This responsive engine is coupled with Alfa™ Active Suspension, Alfa™ D.N.A. Pro, with Race mode, Brembo® high-performance braking system, Alfa™ Q4 four-wheel drive and 50/50 weight distribution for a class leading driving experience.

For more information on the Alfa ‘Sound Tunnel Index’ and to listen to the audio recordings visit thislink.