June 24, 2020 - This year marks 110 years since the beginning of the story of a legendary Italian brand whose achievements very few can match. It is an enduring love story fueled by a passion for design, technological innovation, performance and racing victories around the world.

Alfa Romeo history is rich with memories of the remarkable entrepreneurs, designers, mechanics, drivers and the movie stars and many fans and enthusiasts who have immortalized the brand.

Although this remarkable 110-year-long story can’t be told in just a few words, it only takes a few moments looking through the pages of Alfa Romeo history to feel the uniqueness and emotion that the brand has inspired over the decades. And they are the same emotions we experience today when we see designs of the Giulia and Stelvio Quadrifoglio flow from the styluses of designers at the Centro Stile in Italy.Text here ... 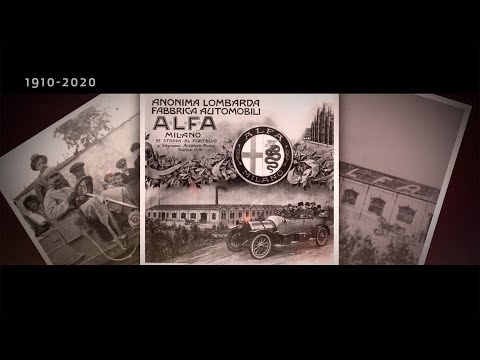 The Genesis of a Legend: the 24HP

Officially established in Milan on June 24, 1910, A.L.F.A. (Anonima Lombarda Fabbrica Automobili – Automobile Factory of Lombardy) had great ambitions from the outset: the first car produced at the Portello workshop was the 24 HP, developed by Giuseppe Merosi, a master engineer specialized in engines for competition. In every way, it defined the Alfa DNA that we recognize today: elegant, sporty, technologically advanced, and with its own unique personality. In 1911, two Corsa versions of the 24 HP – another brainchild of Merosi’s – competed in the Targa Florio. This was one of Alfa’s first foray into the world of racing.

During World War I, entrepreneur Nicola Romeo took over management of the company which, with the onset of the war, shifted to military production. In 1919, the company resumed car production and changed its name to Alfa Romeo, heralding the beginning of a new era.

The World of Races and Victories

In the 1920s and ’30s, some of the greatest champions of all time won at the wheel of an Alfa Romeo: Campari, Sivocci, Ascari, Nuvolari, and another name that made its mark in the annals of automotive history: Enzo Ferrari, who joined Alfa in 1920.

In 1923, Enzo Ferrari persuaded Nicola Romeo to hire Vittorio Jano, a young engineer working for Fiat. Jano immediately put his remarkable technical mind to work for Alfa Romeo with his debut model, the GP Tipo P2, which marked a turning point for the company in competitive racing. Capable of 140 hp at 5500 rpm, its power was a mystery to opponents.

In 1924, Alfa Romeo dominated the French and European Grand Prix with Giuseppe Campari behind the wheel of a GP Tipo P2. This epic victory in front of 400,000 spectators catapulted Alfa Romeo into the headlines. In 1925, the P2 powered Alfa to victory at the inaugural World Championship.

For the 1923 edition of the Targa Florio, Alfa Romeo prepared a racing version of the RL and summoned the best drivers of the time. Not wanting to leave anything to chance, the company also painted a lucky charm on the hoods of its cars: a four-leaf clover or Quadrifoglio.

Alfa Romeo won with Sivocci at the wheel and Ascari came second – a momentous victory for the brand. The Quadrifoglio went on to become the symbol of Alfa Romeo’s most legendary racecars.

First among Equals: the Alfetta

The most famous Alfa Romeo single-seater is undoubtedly the 1938 Tipo 158, better known as the “Alfetta”, designed by Gioachino Colombo. With a supercharged 1.5-liter, 8-cylinder engine delivering 195 hp, the Tipo 158 made a victorious debut at the Coppa Ciano in 1938.

With the subsequent outbreak of World War II motorsport was stopped in its tracks, but began to make a comeback in the late 1940s.

1950 marked the first Formula One World Championship, with a series of races including the most famous Grand Prix. The Alfetta dominated the first two F1 championship seasons. Nino Farina, from Italy, became the first F1 world champion in 1950. Juan Manuel Fangio, from Argentina, won the first of his five world titles the following year at the wheel of the Alfetta.

The Giulietta and the Appeal of “Made in Italy”

Despite dominating the circuit, Alfa Romeo decided to concentrate its effort on re-launching production cars and withdrew from racing, undefeated. Following up on the considerable commercial success of the Alfa Romeo 1900, launched in 1950, the company introduced the Giulietta Sprint in 1954. This car, which was also produced in Spider and Berlina versions, consolidated Alfa Romeo’s position as a major automaker and demonstrated Italy’s determination to emerge from the dark years of the war. The Giulietta introduced a level of performance and handling that was unique in its segment and it was the first mass production car with a twin overhead camshaft engine made entirely of aluminum.

Alfa Romeo started exporting cars to the United States in 1961 to a distributor who was keen to offer an open version of the Giulietta. The Giulietta Spider became one of the icons of the post-war automotive renaissance and of the “Dolce Vita” years: people called it “the Italian sweetheart.”

Giulia: A Star is Born

Eight years after the success of the Giulietta, Alfa Romeo unveiled the Giulia TI. With a record drag coefficient of 0.34, weighing 2,205 pounds (1,000 kilograms) and packing a 1570 cc engine, Giulia was well-known among small European sedans for its lively handling, acceleration, safety and overall driving dynamics.

While the Giulietta Spider was adored by Italian cinema, it was the Spider 1600 “Duetto” that conquered Hollywood and America and generated a cult of its own, inspired by iconic scenes that have become an indelible part of film history. Produced from 1966 to 1994 (four generations and over 124,000 units), the Spider is the longest lasting Alfa Romeo ever.

In 2016, Alfa Romeo introduced the all-new Giulia and Giulia Quadrifoglio, the first of a new generation of performance cars in the pure tradition of Alfa Romeo. This was followed in 2017 by the Stelvio (including Quadrifoglio version), the brand’s first-ever SUV. Both models have won multiple awards and established themselves as the benchmark in their respective peer groups.
In March this year, to mark its 110th birthday, Alfa Romeo unveiled the Giulia GTA, a limited-edition high-performance sedan which pays tribute to the 1965 Giulia Sprint GTA, one of the brand’s most emblematic vehicles.

Inspired by its illustrious past and ingrained values – performance, design, technology – Alfa Romeo continues to move forward with a vision, energy and commitment that will enhance its legacy for the next 110 years.

Back
Vehicle Valuation
Compare Saved Vehicles
Top
Close
Your Cookie Settings
Select your cookie settings
Strictly Necessary Strictly Necessary cookies are essential to let you move around the website and use its features, such as accessing secure areas, shopping baskets and online billing. These cookies allow our website to provide services at your request.
Functional Functionality cookies are used to remember the choices you make, e.g. your user name, log in details and language preferences. They also remember any customisations you make to the website to give you enhanced, more personal features.
Targeting Targeting cookies collect information about your browsing habits to deliver adverts which are more relevant to you and your interests. They also measure the effectiveness of advertising campaigns.
Save Settings
Cancel Changes

Your settings will take affect when you refresh the page or move to a new page. Find out more about cookies